Welcome Ricky to Lucky Dog! Ricky is a 4yr old Miniature Pinscher with natural tail and ears weighing a muscular 20lbs. Ricky has come to Lucky Dog as a transfer from another Wisconsin rescue where he was not doing well. Ricky is absolutely adorable but also a typical under socialized possessive Min pin. The first five minutes Ricky meets someone he acts like he wants to eat you. Then he gives you lots of kisses and wants to be glued to you. Always. Wherever you go! His foster mom has been working very hard on properly meeting new people. At first when people would come stop by Ricky would flip his lid! He would jump up on people and bark like crazy! Now he greets people much more quietly and with less jumping. His adopter will need to be familiar with min pin behavior and be willing to continue working with Ricky when it comes to new people. Ricky is extremely smart and crafty-like most pins of his age. He needs activities to keep him busy like Himalayan dog chews, hooves, bulky sticks and a variety of squeaky toys to run around with. He also needs exercise. A large part of Rickys anxiety around new people comes from a lack of exercise and lack of socialization. We suggest a day or so a week at doggy daycare, obedience classes and just plain old going for walks around other people and dogs. When it comes to other dogs Ricky is ok with dogs bigger and more dominate than he is. Submissive dogs and smaller dogs or cats are not a good idea for him to live with. He can be extremely jealous and be aggressive with dogs that compete for attention. His foster mom has been working with Ricky on his possession issues and he has been improving. His adopter will need to continue working with him on this likely a lifelong process for Ricky. On his own with his people Ricky is the biggest love and goofy character. He loves running around the house with his squeaky toys and playing fetch for hours. Min pins by nature are lifelong runners. For his safety and yours he really does need a fence for exercise and his safety. This means a physical fence not an underground fence. Underground fences are not allowed to be used with any Lucky Dog Rescue dog. Ricky was surrendered to the previous Wisconsin dog rescue because he got out and was hit by a car. The rescue paid to repair his leg and helped him regain his strength in his leg. Today you would have no idea he had a very broken leg by just looking at him. I think having a fence of his own to run around in and play catch in will be a huge bonus to him and his forever home. Ricky’s perfect home will be familiar with min pin behavior and training needs, active, patient, and above all kind. Older kids or no kids are preferred. Larger more dominate dogs or no dogs are preferred. No cats or small feathered or fluffy animals please.Rickys adoption fee includes all vaccinations, microchip with lifetime registration to lucky dog rescue, heartworm test and prevention, flea/tick prevention, neuter, full health exam, full behavior profile, and health certificate. To apply for this very special boy please fill out an application on our website www.luckydoggyrescue.org Ricky is located in Fond du lac, WI. 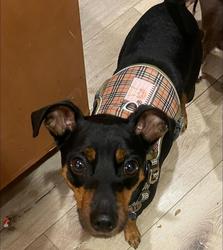